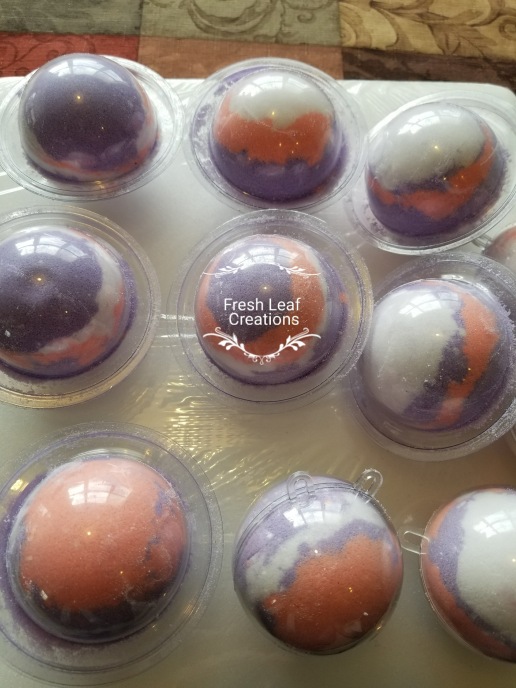 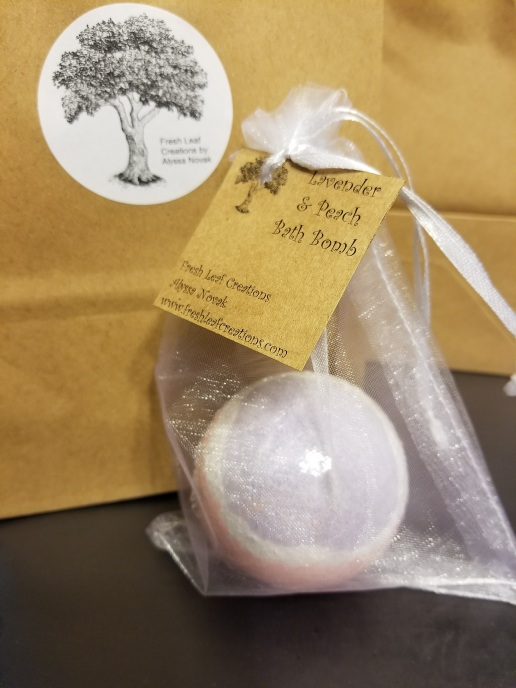 Bath Bombs are ready and waiting for a nice warm bath!  Check out the Etsy Store or the Facebook Store.  Right now just the Lavender and Peach Bath Bomb is available but more are coming soon!

360 bars of soap in 30 different fragrances are all ready for the fall.  Starting with a soapy party and an artisan pop-up market in October and four different Artisan/Holiday Markets in November and December! 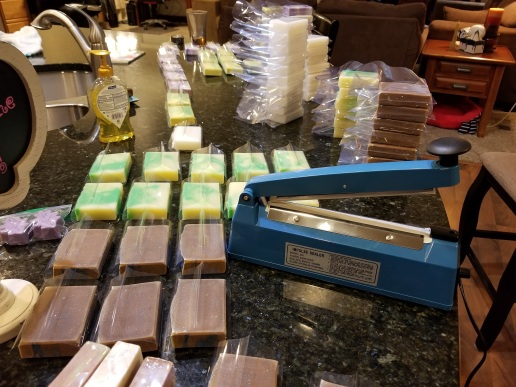 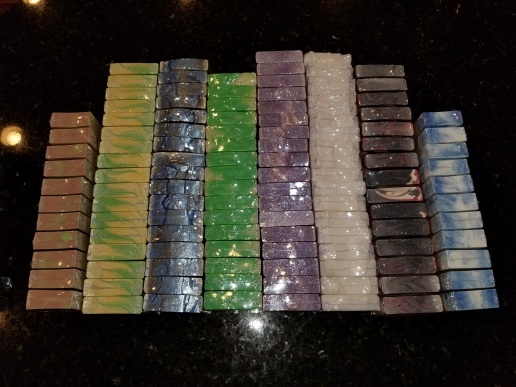 Packaging the bulk of these soaps in one go took several hours.  Finishing the bars, wrapping in shrink wrap, heat seal the bars, heat gun to shrink the wrap, then finally label each bar with the proper label.  Doing this 360 times over the course of several days makes all the bars blur in your head. 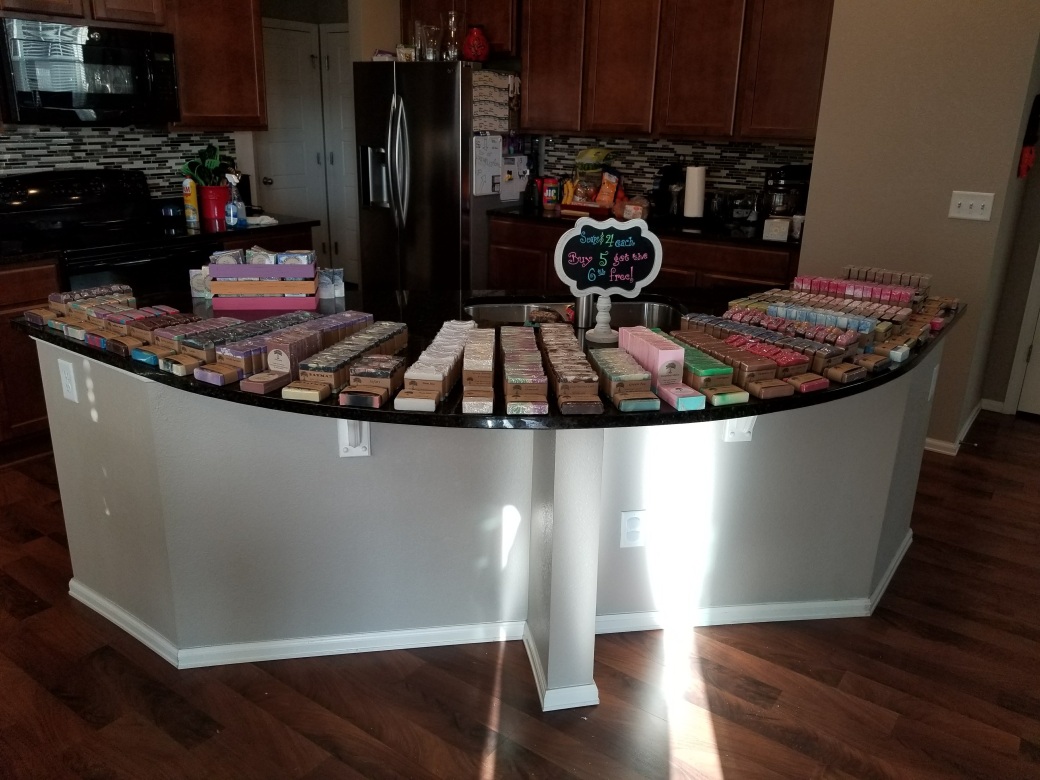 I didn’t realize how many batches & bars I had created until it was all set out for the soapy party.  I’m surprised I got them all onto one counter top.

If you are in the area please come see me at the Longmont Artisan Market October 28th 712 Main Street.  Hope to see you all there!

I couldn’t wait to show you what I’ve been brewing up! 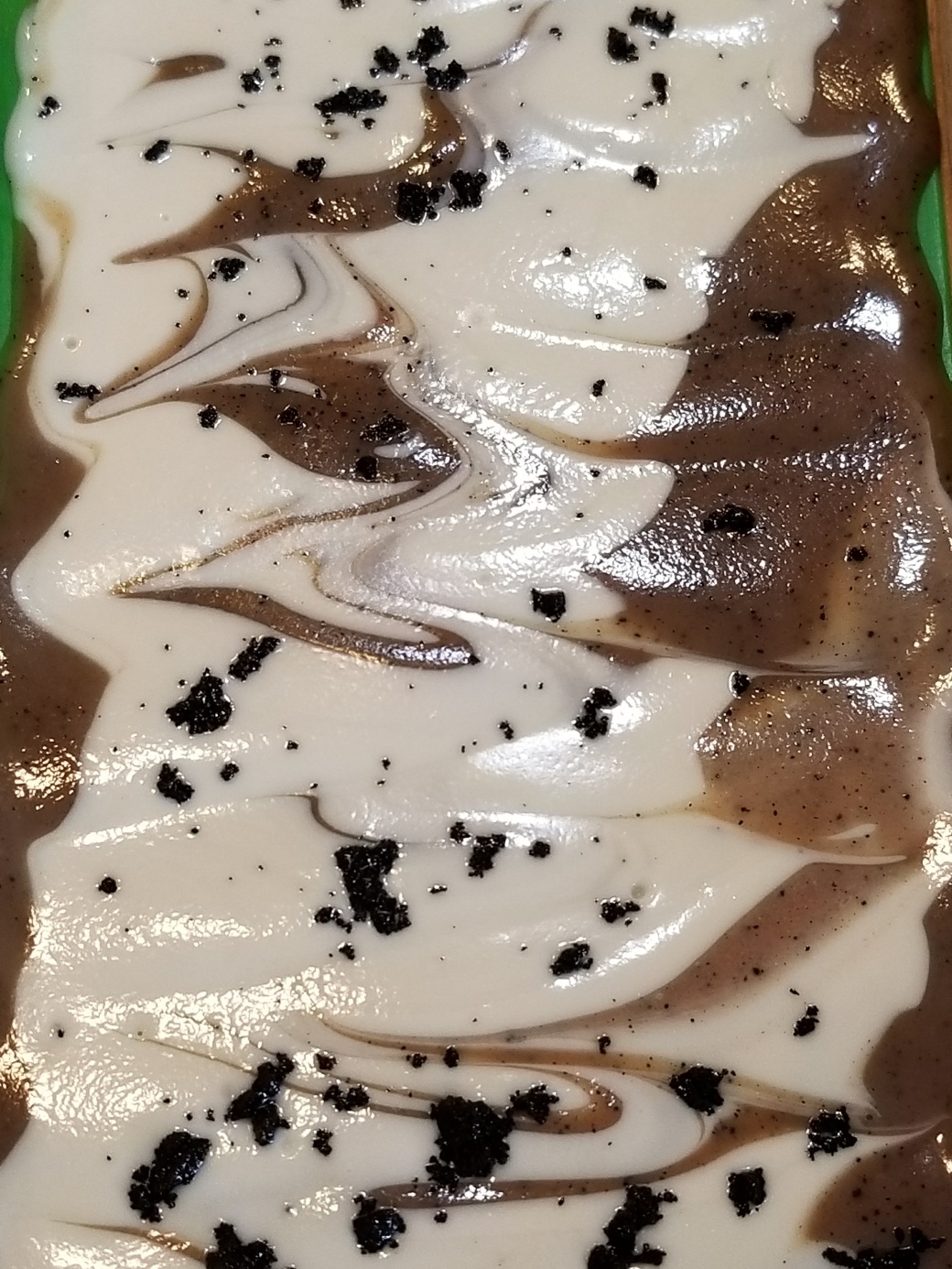 It’s back!  One of the most popular soaps I’ve made to date is my Exfoliating Latte Soap.  But I’ve improved on this batch!

This is made with coffee direct from Ziggi’s Coffee on Francis Street right here in Longmont.  This local hangout has the most amazing coffee as well as every other drink you could imagine.  The baristas like to go for a challenge and welcome new creative drink orders.  They have become like family!

I have decided to make these soaps “Coffee Soaps for A Cause”.  Each bar of Exfoliating Latte sold in this batch will have the proceeds of the sale donated to Hopelight Clinic! 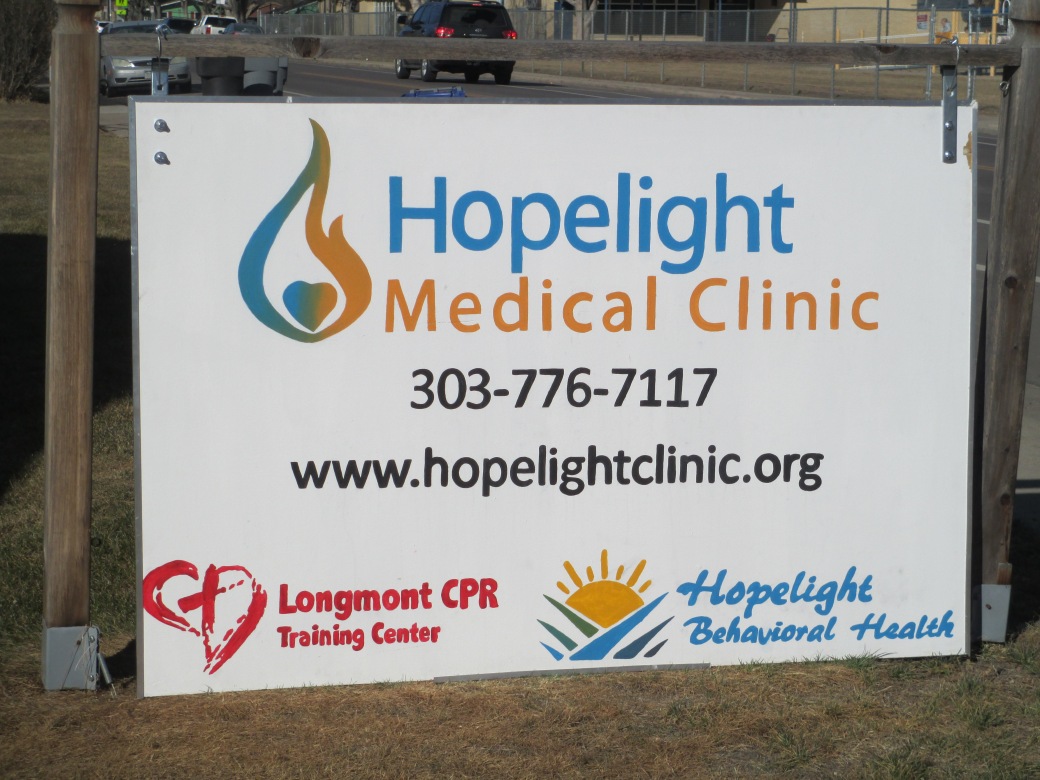 Hopelight Clinic started as a medical clinic but has grown to be so much more.  Hopelight is a free/low-cost medical clinic, behavioral health center, fitness program, kid’s art and music program, emergency food pantry, tutoring center, and they feed the homeless hot, home-cooked lunches.  This place is amazing!  Please click one of the links above to read more about Hopelight and the amazing work they do and buy Exfoliating Latte soap to help support this wonderful charity!

First we have Batman: 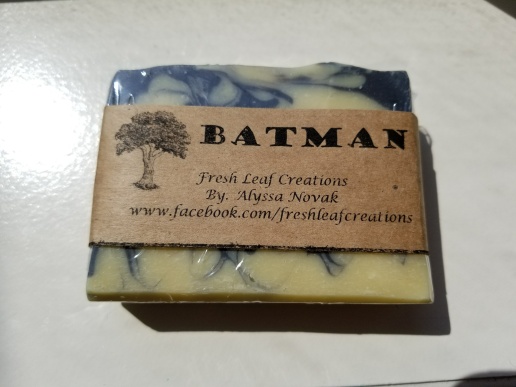 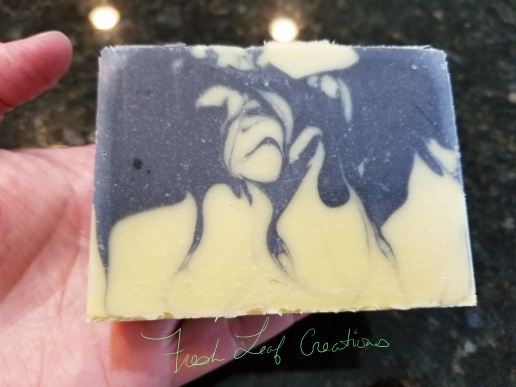 Then we have the very popular, Fairy Garden: 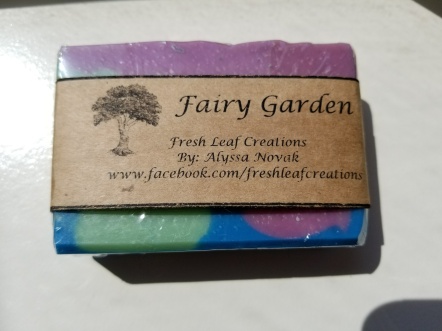 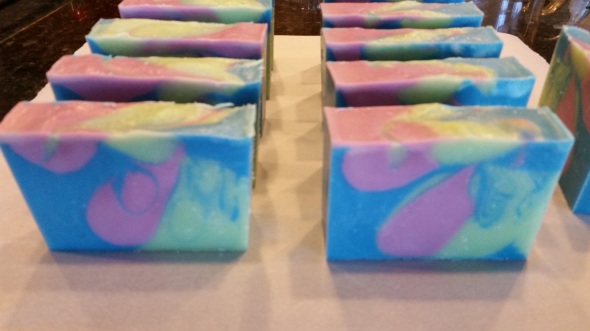 These bars usually sell out quickly!

All new to my soaping line up is Green Tea: 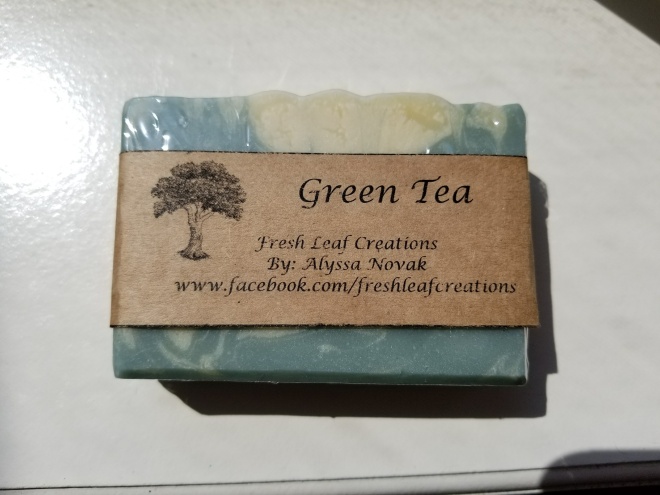 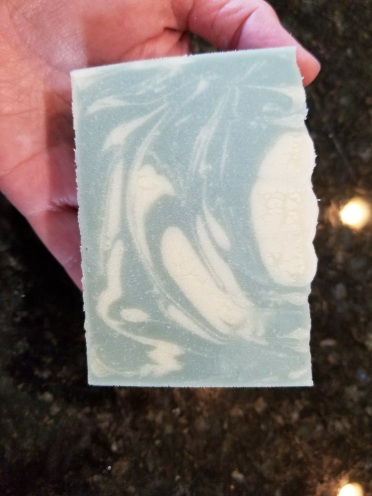 Sure to delight and refresh!

Check out my Etsy store for more information about each soap! 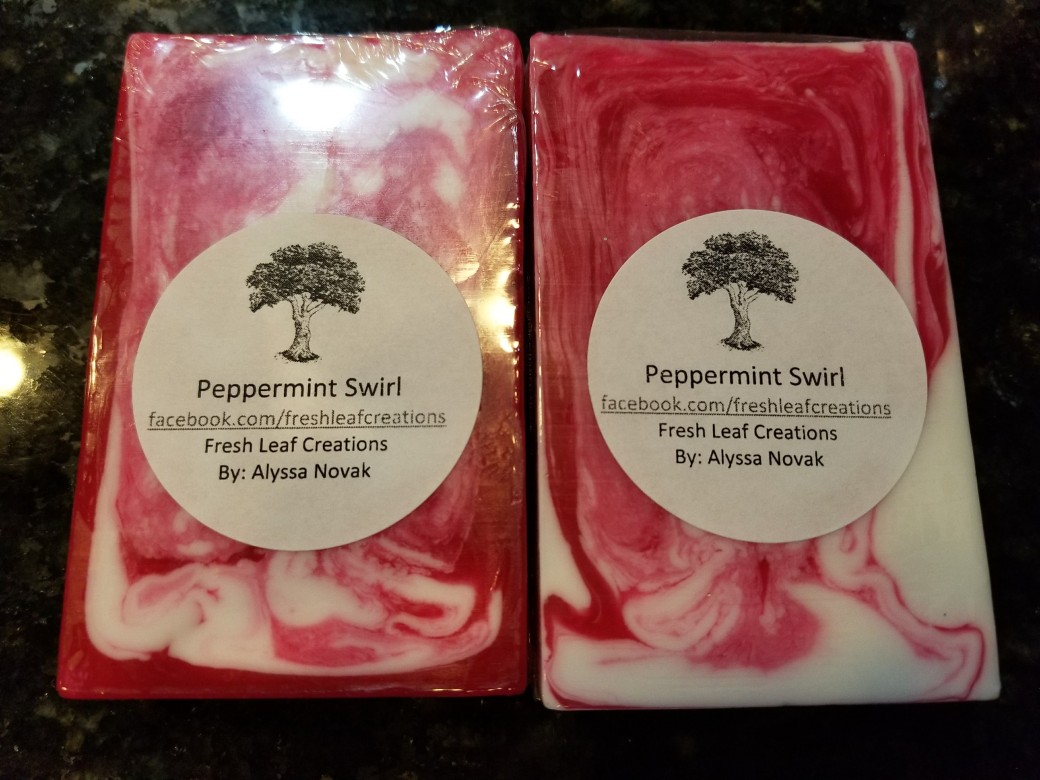 Up until I started creating soaps I hated glitter!  I refused to allow glitter decorations, cards, or apparel into my home.  Now it is almost routine to hear me exclaim, “it needs more glitter”.

My Peppermint Swirl soap was poured and I warred with myself as to whether or not to add glitter to it.  So I did what any logical person would do; I made another batch and dumped on the glitter!

Each batch looks different and I love both!  Oh, and I added 25% more peppermint fragrance this year!  This soap is a mighty, minty, monument to glitter; unless you don’t like glitter, then I still have you covered!

While I am on the subject of my new favorite, yet scary things; have you seen my soap knife?  I love this knife so, so much! 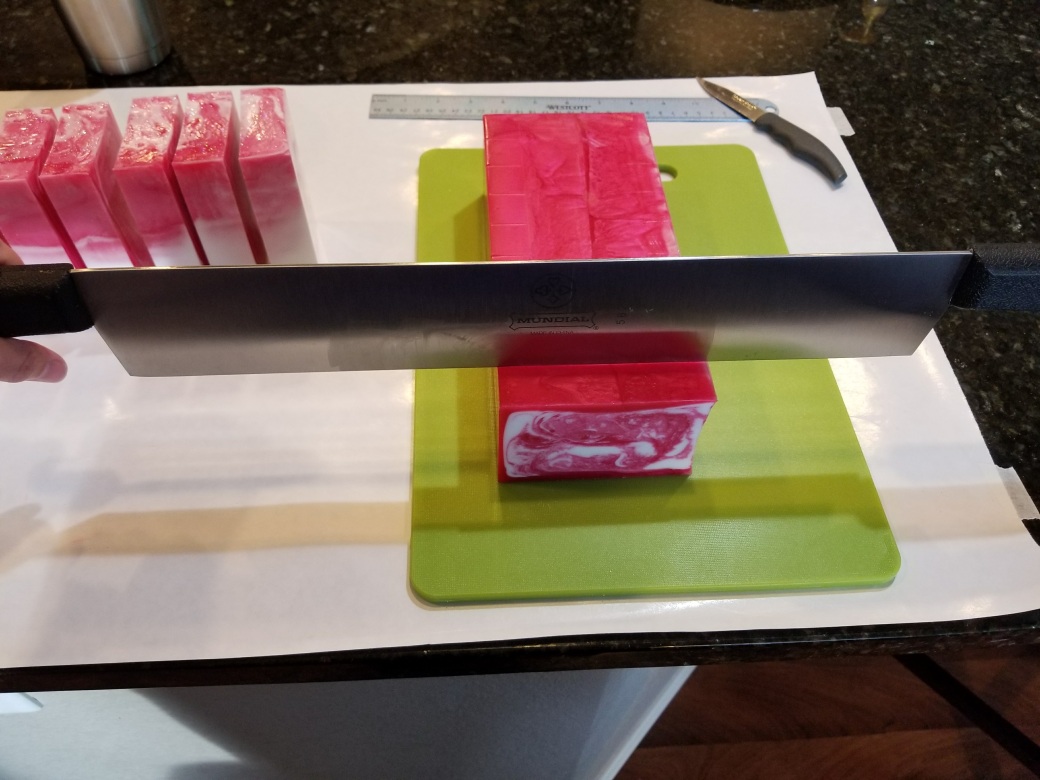 Want to see the knife in action?  Jump over to my https://www.facebook.com/plugins/video.php?href=https%3A%2F%2Fwww.facebook.com%2FFreshLeafCreations%2Fvideos%2F181325009077020%2F&show_text=1&width=560” target=”_blank” rel=”noopener”>Facebook page to watch the video!

Peppermint Swirl will be up on my Etsy store on September 1, 2017.

Fall is my favorite time of year!  The colors are beautiful, the air is crisp, and all things pumpkin hits me in the face with a ferocity known only to the victims of the Incredible Hulk!

Oooooh, Hulk soap! Gotta write that one down!

Believe it or not, I’ve been planning for fall for months now.  I ordered all my fall and Christmas fragrances weeks ago and the soaps they are destined for are now curing to be ready to pounce upon the “pumpkin starved masses” next month.  They will fully ripen by then, not to worry!

How can people not like pumpkin? I don’t understand that. For those strange few, I have created a Hot Apple Pie soap.  It smells like fresh baked apple pie like mom makes.  Oh, I’m sorry!  You haven’t tasted my mom’s cooking?  You are totally missing out; she is an amazing cook and you will never leave her house hungry.  Well you can smell this soap and know how much you’ve missed out on Mom’s cooking! 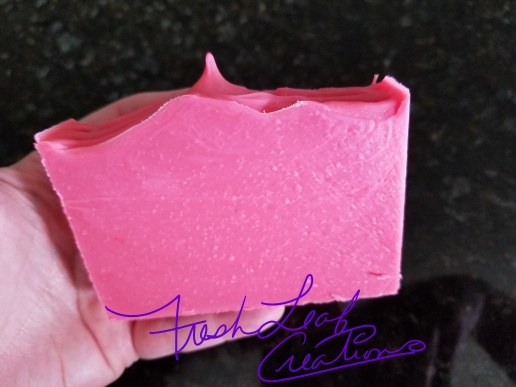 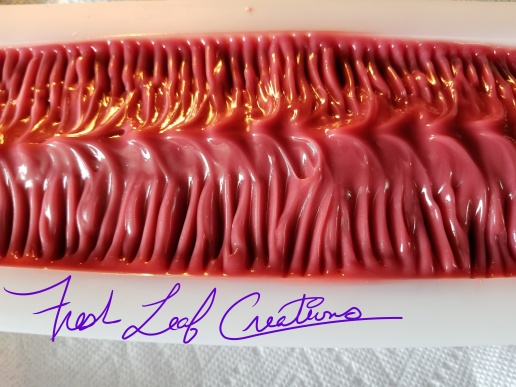 Christmas is coming!  So is peppermint!  One of my best sellers will be back on October 21st!  Look for it and all my specialty soaps coming soon in my Etsy shop! 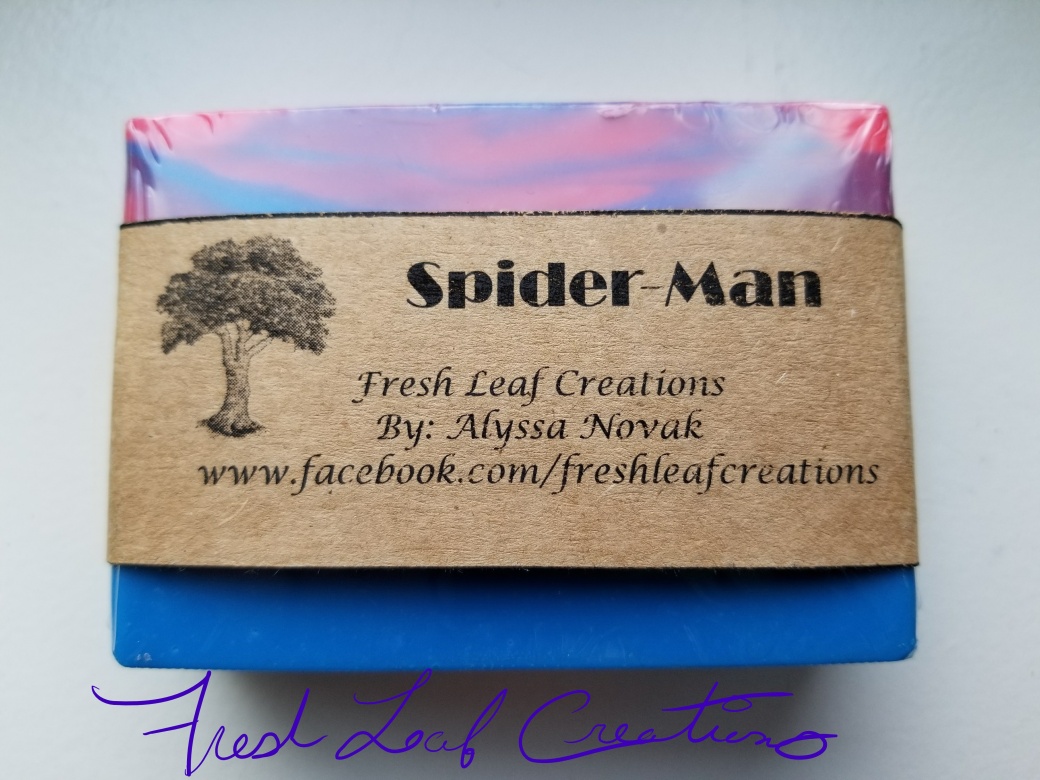 Four weeks ago I cut into a fresh loaf of soap and was singing the Spider-Man theme song the whole time!  Today as I package the fully cured and amazing smelling (see what I did there) soap I sang it again!  You don’t have to be a super hero to enjoy this soap but it will make you feel like one!  I went and found all the words to the complete Spider-Man just in case you wanted to sing along with me! 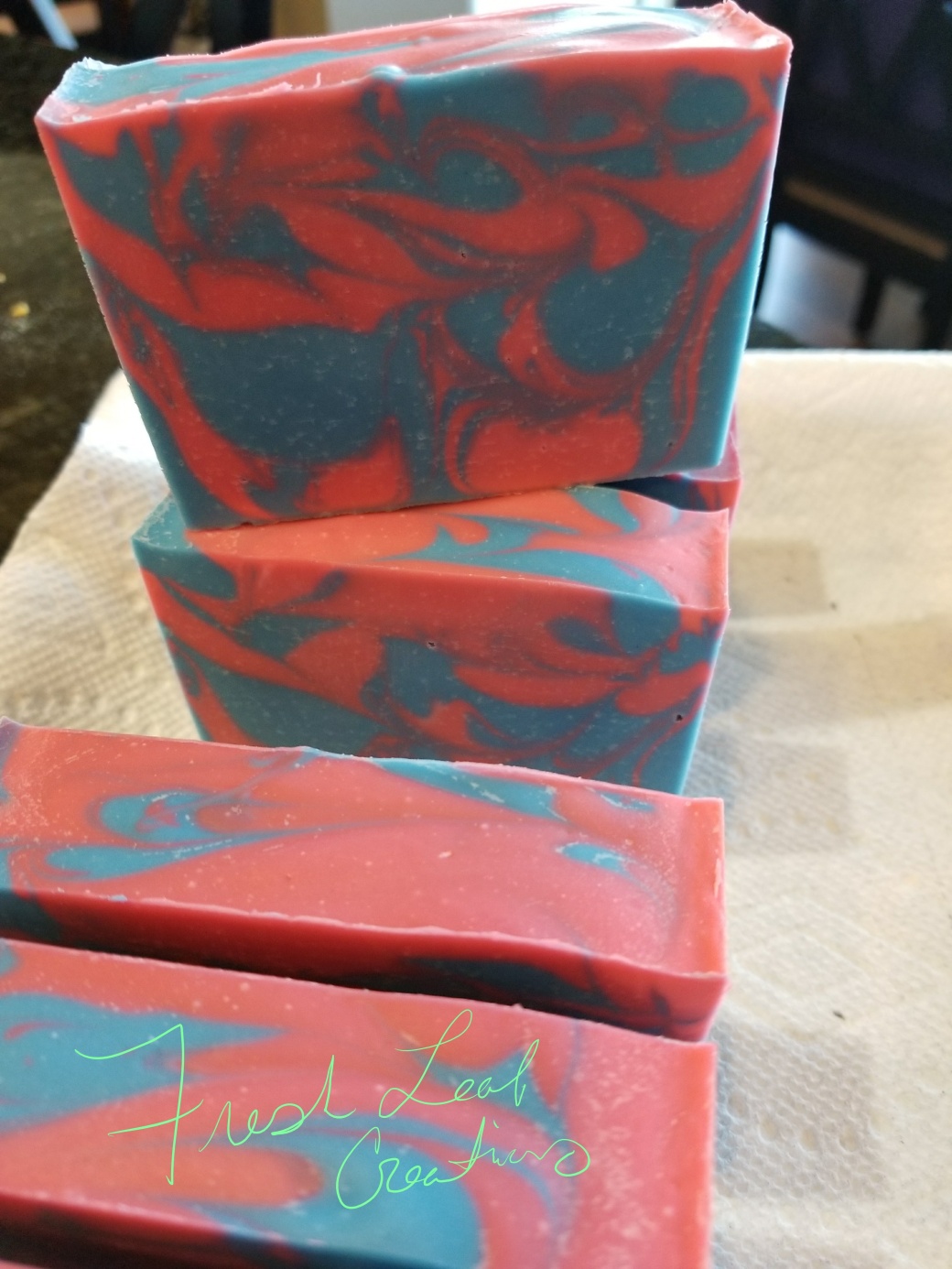 Spiderman, Spiderman,
Does whatever a spider can
Spins a web, any size,
Catches thieves just like flies
Look Out!
Here comes the Spiderman.

Is he strong?
Listen bud,
He’s got radioactive blood.
Can he swing from a thread
Take a look overhead
Hey, there
There goes the Spiderman.

In the chill of night
At the scene of a crime
Like a streak of light
He arrives just in time.

To him, life is a great big bang up
Whenever there’s a hang up
You’ll find the Spider man. 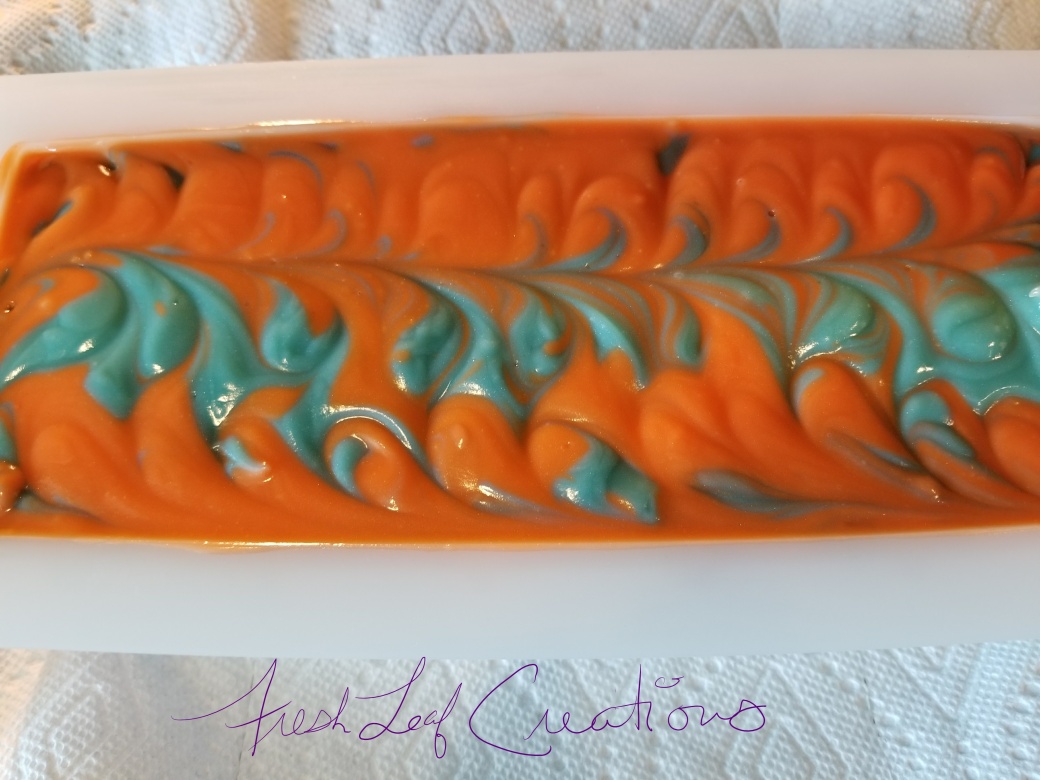 For my first Autumn themed soap I present to you Bronco Country.  The smell brings you images of crisp days at the stadium.  Look for it to hit Etsy and store shelves in September, just in time for football season! 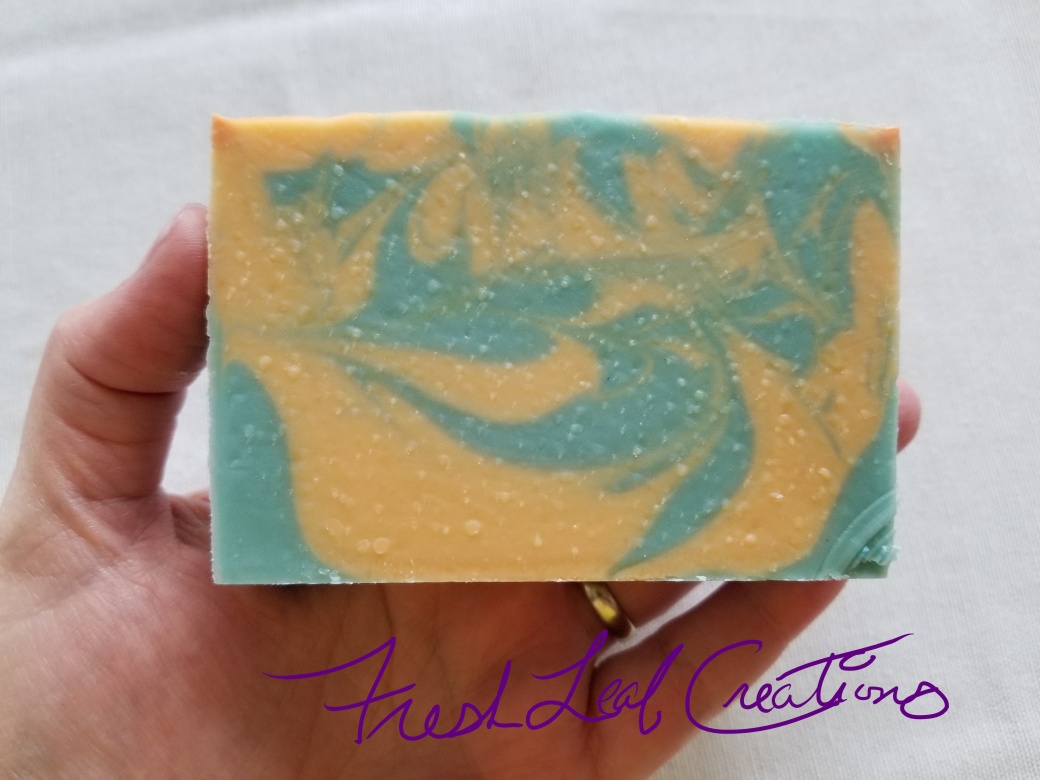 Below are pictures of the same recipe of soap, same ingredients, and same colors; the soap on the left was allowed to go through gel phase and the one on the right was rapidly cooled after pouring into the mold. 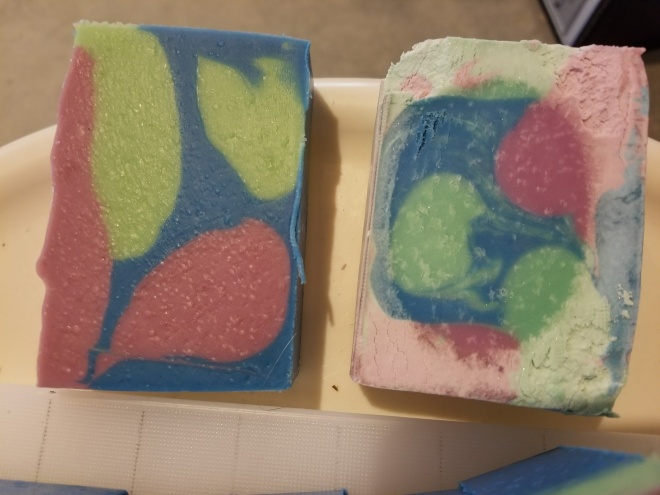 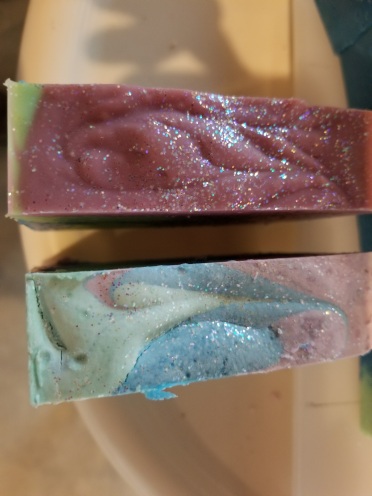 Soap making is a wonderful science and there are so many variables to consider.  Gel phase is just one more step that you can control.  I enjoy the process of making soap, even if sometimes it doesn’t turn out as I had planned for it to.

There are so many great superhero movies!  Right now, the market has been flooded with movies from both D.C. and Marvel comics showcasing many of the heroes we all grew up with.  Most people have their favorites they side with.  I live in a divided house, I love everything Marvel and Jeremy is more partial to D.C. comics.  Our daughter has been Switzerland and says she loves them equally.  Jeremy has always been a HUGE fan of Batman and to a slightly lesser degree, Superman then Spider-Man.  While I do enjoy Harley Quinn and The Joker that is about where my D.C. limit is.  I love the X-Men & Avengers; Gambit and Black Widow being my favorites!

Jeremy is a big part of my soaping business being successful!  He takes bars to his work and usually sells quite a few of them to his co-workers.  Jeremy also encourages me when branching out into stores and Etsy sales.  He also helped me create the logo and even name of Fresh Leaf Creations!  These areas are so important but the most important impact Jeremy has had with my soaping is that he encourages me and allows me to make more soaps than I probably should.  Because of these amazing things he does for me, I wanted to thank him.

I decided to make a superhero inspired line of soaps and since my husband is amazing I started with D.C. characters first.  I intended to make a Superman soap first but the bars just screamed Spider-Man.  I think the swirls turned out looking more like webs in these bars.  The scent is called “Pheromone” and smells superhero-y to me.  The longer the bars cure the more intense the fragrance and bold the colors will become.  Much like every Spider-Man remake! 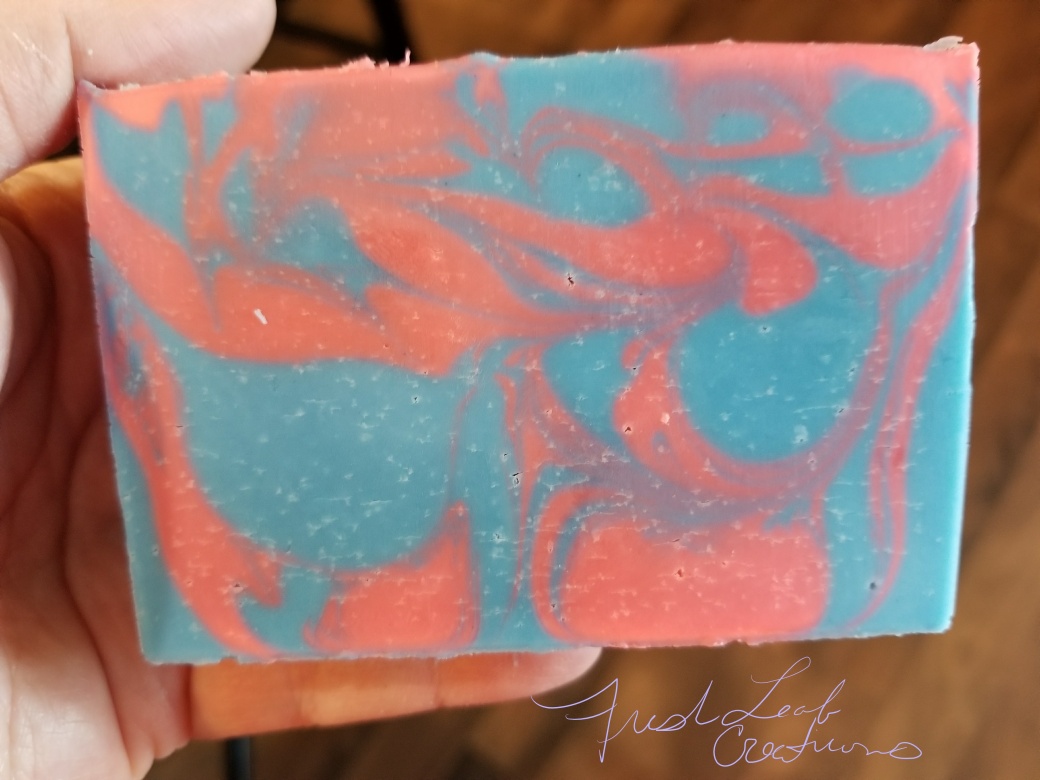 Next came Harley Quinn!  You know I had to make one for her!  With a white base and teal and purple “pigtails” on either side I thought the bars turned out well!  It is scented with Lavender and Chamomile which makes these bars sweet smelling but shockingly colorful; just like Harley Quinn from the movie Suicide Squad. 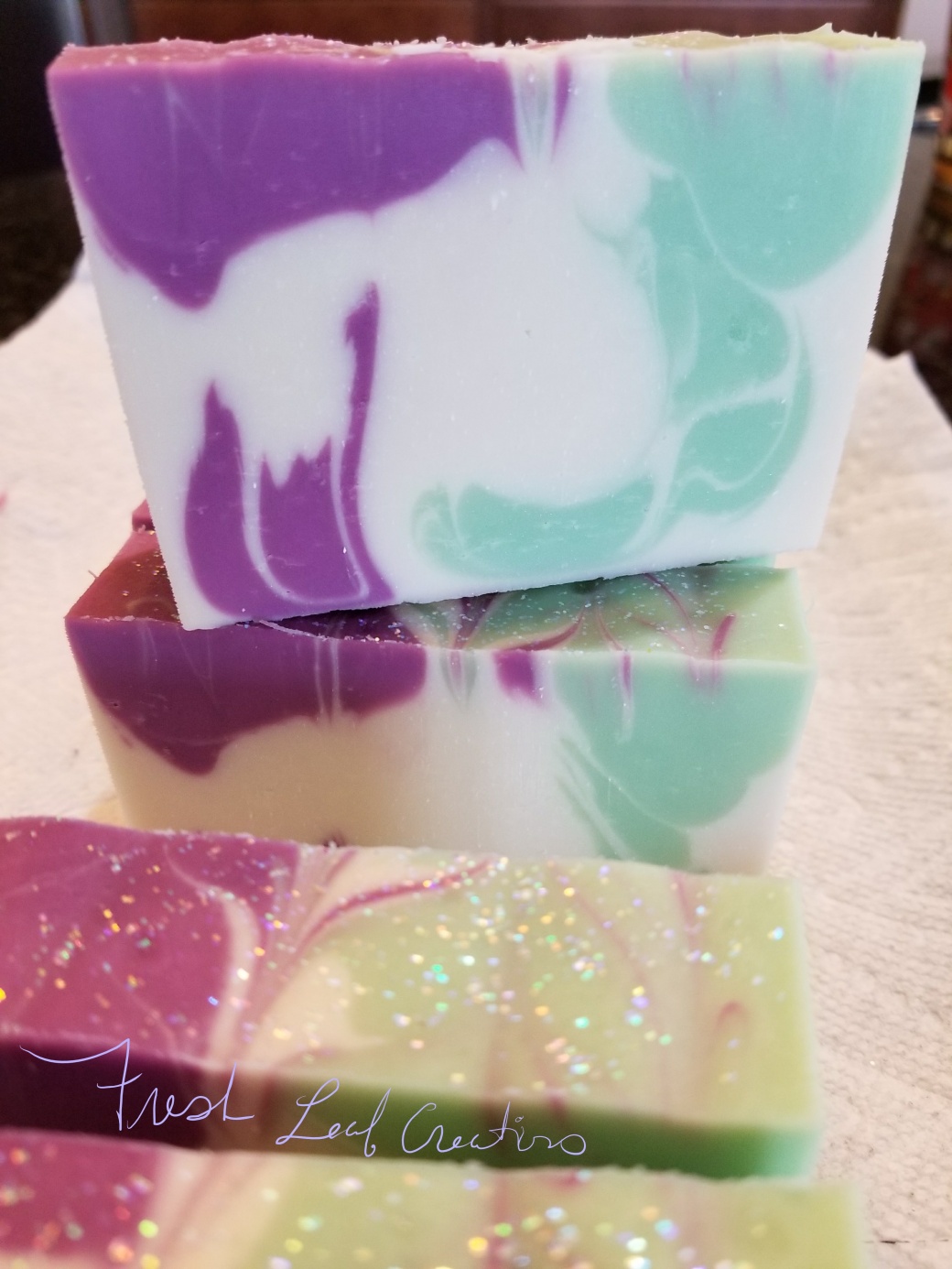 If you are going to make superhero inspired soaps you have to have Batman; Jeremy’s favorite.  You would think that Batman would be easy to replicate but it is just as temperamental as the bat himself!  It took me three tries to get a decent batch that could be paired with the Batman name.  The fragrance is a wonderful, morose fragrance with a rose and pearl base but goes amazing with the Dark Knight theme.  I have a feeling this bar will be popular! 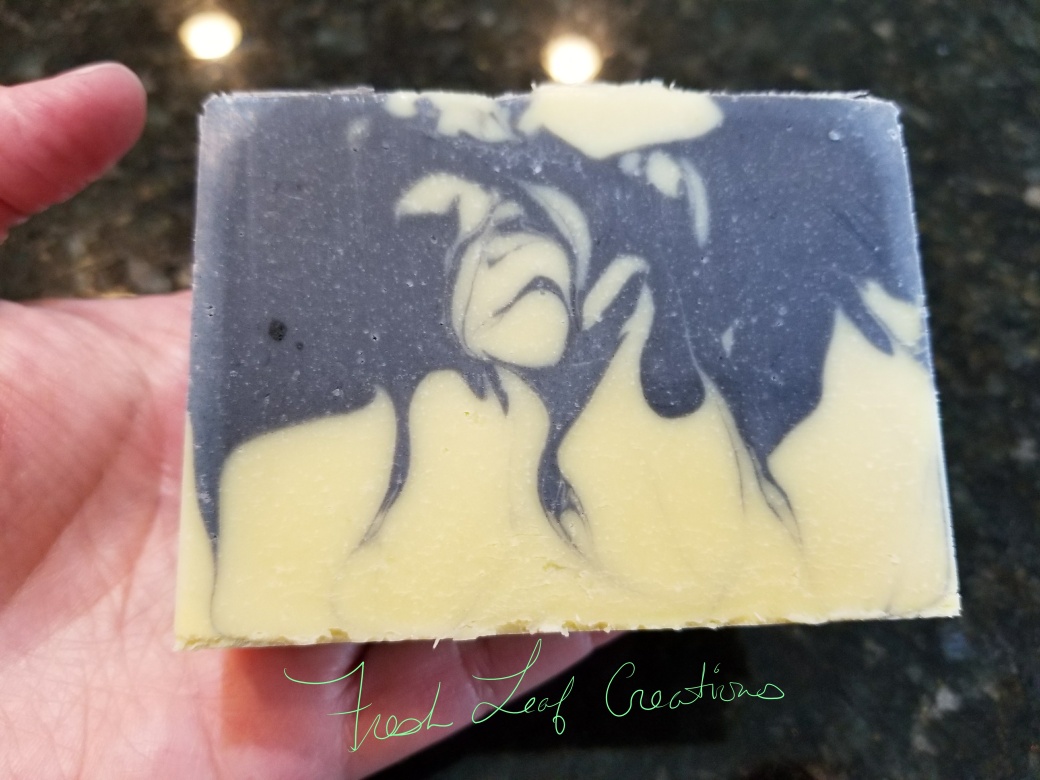 So, what is next?  I plan on jumping ship to the Marvel side of the universe.  I’m currently playing with a Hulk soap but I’m dying to try a Captain America soap.

Drop me a line

I love to hear from you! I enjoy getting soap and pottery requests and love hearing your comments. Just click the Contact link